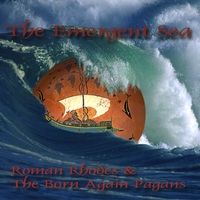 From the recording The Emergent Sea

Kirk's Caledonia (Moon on the Ocean): In memory of Kirk MacGeachy. This song was originally written by my good friend, the singer songwriter Kirk Macgeachy. In 1996 he asked me to help him with the words, I provided the chorus and numerous suggestions in the verses, some of which got incorporated and many of which got dropped--Kirk being a much wiser writer than myself, made it simple and clear, as you find it on his CD of the same name as his song: Moon on the Ocean. Out of the blue, however Kirk died, to the shock of many. He was in his mid 50s, but in very good shape. He had fallen through a hole in the floor at his house in Scotland while making repairs. Though he survived, there must have been some internal bleeding, possibly a clot that eventually stopped his heart. He returned to Canada the same week, and with a cane went onto play 5 gigs in a row, finishing on Saturday night at the Ottawa Folk festival. He died peacefully in his sleep that night. It seemed to all of us he had not just many more happy years, but that it was only a matter of time before he really made it big. His Band Orealis had backed the Pogues and Waterboys. All who heard his silver voice were deeply moved. All who met him touched by his warmth and laughter. Life and success (of the commonly meant sort) shines on some and not on others though, and the big breaks never came for reasons Kirk and I often discussed, but too long to go into here. But life did shine on and through Kirk MacGeachy, all who knew him would agree, it shone brightly. Kirk was born in Scotland and though he returned every year, had really made his life in Montreal Canada, teaching Geography at John Abbott College--indeed running the entire department, and playing his music throughout Canada and the U.S. He often talked about how when he returned to the beauty of Scotland how hard it was to have to return to work in “even the relatively beautiful”city of Montreal. Humans were meant for nature. This song was born of those feelings. For me, having moved even further abroad to Japan, this song touched the deep heart of many ex-patriot experiences. Even as one loves one's new land, you can't help missing, family friends, and the very nature of where you grew up. I left when major cuts were happening in the education world, especially at the universities where I was teaching. My music too never seemed to get off the ground. A director would want it for his movie, a radio host for her show and all came back with the "we can't afford the original playing fee set by the musicians union." While I generally support unions, they sure block a lot of new talent from growing. So I left. And in redoing the song for Kirk, I felt I wanted to get that edge back in the song.  It's a little too political perhaps for such a beautiful song, but I always like that mix of beauty and edge, for that is life as I see it. There's no real enjoyment without acceptance of truth, and beauty is deeper for facing it. So this song has a number of themes woven in: the ex-pat's longings, the economics that force people from their homes in the first place, and the loss of a close friend and truly great person and musician.
I leave you with the obituary I wrote for him: To know Kirk is to love him. He, like dear Pat, is a free spirit who touches every heart who meets him(yes even now), fills it with laughter and a natural joy of life. A voice like silver-gold moonlight shimmering on Loch Gairloch, on the western shores of the Hebridean Islands, in the cool clear waters of the North Atlantic, He has not gone, he is only roving, his heart called him home. You'll see him anywhere the moonlight plays on water and where his songs live on, with his voice in our hearts. I hope you who listen to this song, can hear his silver-gold voice calling. RR


There's a moon on the ocean, shining down on me.
There's thousand Islands in a single mystery.
I've been looking for fortune in far off distant lands,
but I'm lost as ever, I gotta get back to my Celtic strand :gotta get back.:

The promises of cities the poverties of home,
We try our luck with destiny, try to make it on our own.
And it's just as John says, life happens as we make our plans,
I've been seeking for a living, lonely for my homeland.

Chorus
Oh my heart is calling me, calling me back home.
I hear the big sea rolling everywhere I roam.

Now all the world's a flat place, and every where's the same:
pirates loot and burn countries with a globalizing flame.
And it's just as Saul says, "society keeps us from ourselves,"
I've been on distant continents, got to get back to the Celtic shelf.

Bridge:
And in the evening when the sun is sinking low.
And all the birds fly in from sea.
It's then I know that I should spread my sails and
go back to you who waits for me.
Are you waiting, waiting there for me?
Bridge part 2
Oh silver loon, you died to soon,
Your laughter lingers with the light of the moon.
Now I know the fear of a handful of dust
But I've seen all of life in the seed of lust.
You touched us all with your warmth and love,
And your voice shines on like the moon above.

There's a moon on the ocean, I know you'll see it too,
feel the tides in motion, pulling me back to you.
Now I'm searching the heavens for that Northern star,
to shine over my fortune, to lead me back from afar.